Building Bridges: Connecting the Overlapping Goals, Resources, and Institutions of Gulf of Mexico Restoration and Conservation 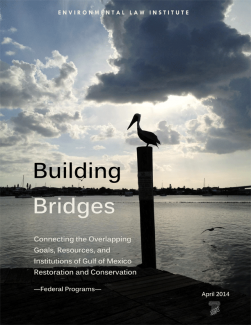 On April 20, 2010, an explosion rocked the Deepwater Horizon mobile offshore drilling unit. Eleven crewmen lost their lives in the blast, and the rig burned for the next thirty-six hours. Then, forty-one miles off the southeast coast of Louisiana, the Deepwater Horizon sank. Back at the wellhead, a quarter-mile away and 5,000 feet beneath the surface of the Gulf of Mexico, the environmental disaster was just beginning. Oil gushed for the next three months, during which millions of barrels of oil mixed with millions of gallons of dispersant to contaminate more than 1,000 miles of coast.

Several processes have been developed to initiate restoration and recovery of the Gulf of Mexico region after the Deepwater Horizon spill. The goals and objectives of these recovery programs necessarily overlap with the goals and objectives of existing restoration and conservation policies and programs. To maximize the benefits realized by these efforts, the programs should not simply exist in parallel. Rather, it is important to find linkages between them to ensure that the current influx of funds for Gulf restoration achieves long-term environmental protection goals, along with developing the institutional capacity to sustain progress made in the recovery from the Deepwater Horizon disaster.

This assessment focuses on one key opportunity to create such linkages—language in the Resources and Ecosystems Sustainability, Tourist Opportunities and Revived Economies of the Gulf Coast States Act (RESTORE Act) that allows funds directed to the states and/or local governments to qualify as nonfederal matching funds for other federal grants. In some instances, it may be difficult for states to raise or allocate matching funds, especially given the uncertain status of some state budgets and limitations on borrowing authority inherent in some state laws. In other instances, the match fund requirements may cause state governments to spend more on a program than they otherwise would, which could “constrain [the states’] ability to spend their own revenues according to their own policy priorities,” possibly making the states’ goals subservient to the federal program goals. The RESTORE Act match provision could allow states to avoid some of these concerns and constraints while also facilitating the achievement of environmental, ecological, and economic restoration and recovery objectives.

The assessment begins with an overview of the primary funding mechanisms for Gulf recovery, including the RESTORE Act, the ongoing Natural Resource Damage Assessment (NRDA), and the settlements with some of the parties responsible for the spill. After a brief examination of their goals and the current allocation of project funding, the assessment describes and analyzes existing federal grant programs with similar objectives. Our conclusion is that there are many instances in which existing state and federal environmental programs could be utilized to leverage Deepwater Horizon funds and link them with existing restoration efforts.

In sum, the assessment aims to build bridges between funding mechanisms that can be used to accelerate recovery from the Deepwater Horizon disaster and to help achieve the long-term health of Gulf of Mexico ecosystems. In the process, it is intended to help build a bridge from the 2010 environmental disaster to a future with a healthy, thriving Gulf.