On October 5, 2015, a historic milestone was reached in Gulf restoration: the terms to settle the United States’ and five Gulf states’ remaining claims against BP were announced. Along with separate agreements with local government entities, these settlements total $20.8 billion. This amount includes: 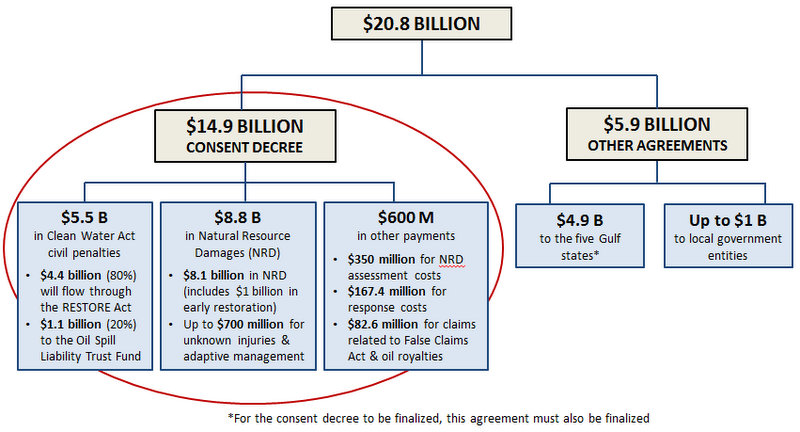 In this post, we focus on the proposed consent decree among the United States, five Gulf states, and BP (the left-hand side of the chart). Specifically, we will focus on:

Note that, also on October 5, the draft Programmatic Damage Assessment and Restoration Plan and Programmatic Environmental Impact Statement (referred to as the “Draft PDARP”) was released. This is a separate document, and will not be covered in detail in this post.

BP has agreed to pay $5.5 billion in Clean Water Act civil penalties, $4.4 billion of which (or 80%) will flow through the RESTORE Act. A few points to keep in mind:

BP has agreed to pay up to $8.8 billion in natural resource damages. This includes $1 billion in early restoration funding, as well as up to $700 million for unknown injuries and adaptive management. A few points to keep in mind:

Some of the details on how the trustees intend to spend the NRD monies are set out in Appendix 2 to the consent decree (further details are in the Draft PDARP). This includes setting out five restoration goals, and allocating funding among those goals across eight restoration areas: 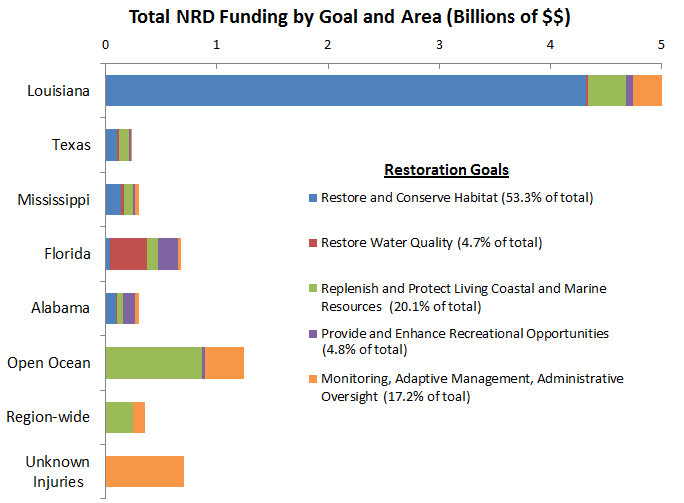 The bulk of the funding is allocated to the “Restore and Conserve Habitat” goal, with most of that money going to projects in Louisiana. Also of note, about 4.8% of funding is going to the “Provide and Enhance Recreational Opportunities” goal. Since approximately one-third of allocated early restoration funds went here (~$287 million), less than 2% of remaining funds will be spent on projects under this goal.

As noted above, BP will not be paying settlement monies in one lump sum, but over a period of time. This is how monies will be paid out over time: 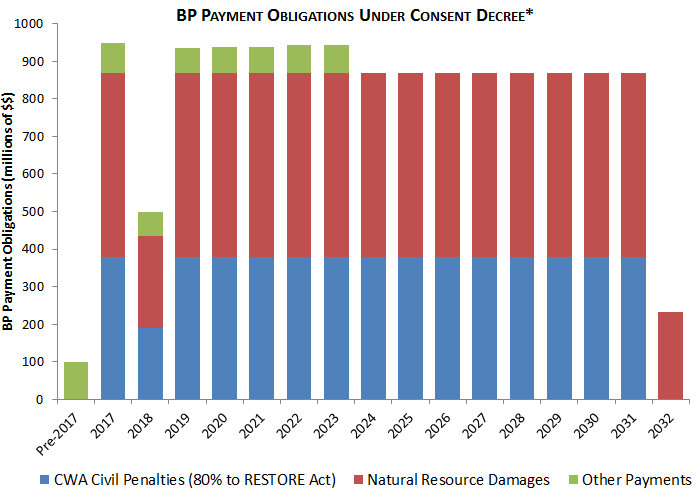 *The chart does not include interest payments or the Early Restoration monies that have not been paid. We are assuming that the consent decree will be finalized in 2016.

Starting one year after the consent decree is finalized, BP will start to pay approximately $900 million a year until 2031. An outlier is 2018, when BP will pay approximately $500 million (note that, under the terms of its criminal settlement, BP is set to pay the National Fish and Wildlife Foundation $894 million in 2018).

IV. How You Can Participate

Continued public engagement is key to ensuring that Gulf restoration and recovery proceeds in a way that meets the needs and priorities of Gulf communities. The proposed consent decree sets out some different ways the public can be involved.

First, the public can comment on the proposed consent decree before it is finalized. The deadline for submitting comments is December 4, 2015. In addition, public meetings where comments are being accepted are being held across the Gulf and in DC. Note that these meetings are being held with the trustees, who will be accepting comments on the Draft PDARP. Check out our Public Participation Bulletin Board for how to submit comments on both documents.

Second, under the terms of the proposed consent decree, BP is required to post certain documents to a public website. This includes documents related to BP’s compliance with certain terms of its criminal settlement, as well as with its agreement with EPA relating to its suspension and debarment. The website will provide a way for the public to track BP’s compliance.

Third, also under the terms of the proposed consent decree, NOAA is receiving a total of $37 million for a “Gulf-wide environmental data management system.” The public will be given access to this system.

The consent decree is monumentally important for Gulf restoration. If approved, it will end over five years of speculation regarding BP’s liability for Clean Water Act civil penalties and natural resource damages. Notably, payments are scheduled to be made over a 15-year time period. Thus, while the consent decree will put five years of speculation firmly in the rear view mirror, it also shines a spotlight on the importance of continued engagement during the long recovery road ahead.