This handbook is a compilation of materials developed for Using Environmental Laws and Alternative Dispute Resolution to Address Environmental Justice, a project funded by the U.S. EPA Office of Environmental Justice under assistance agreement No. TJ-83300001. The views expressed herein should not be attributed to EPA, nor should any official endorsement be inferred.

The workshops provided training in the use of environmental laws and alternative dispute resolution techniques as a way to "get a seat at the table" and address environmental problems. This handbook pulls together the information and materials presented to provide a practical blueprint for the workshop participants to follow in their future community activities and to disseminate the lessons learned from the workshops to a wider audience.

The purpose of this handbook is to assist communities in using alternative dispute resolution (ADR) techniques to solve environmental problems. Unlike lawsuits—where lawyers speak on behalf of communities, and judges decide the outcome—ADR is a tool for communities to seek change with their own voices, to share in decision-making, and to promote innovative solutions. ADR also can be used in cases where there is no clear legal claim or where litigation is just not practical or affordable.

This handbook uses the term "ADR" broadly, to cover a range of tools and skills that can help people address an environmental problem without going to court. Instead of litigation, a community can use ADR techniques to talk and negotiate with the party most able to resolve the problem, such as the company causing harmful pollution or a government agency with the power to step in and help. Usually, ADR involves a "neutral"—a person with no stake in the outcome. The neutral helps design the process for reaching an agreement, and oversees that process to ensure that it is fair to all parties.

In other words, in ADR everyone on both sides of the issue is heard and shares in decisionmaking. The forms of ADR discussed in this handbook are all completely voluntary. This means that the community has an opportunity to consider and consent to each stage of the process—from deciding to participate, to choosing the type of ADR to use, to reaching a final agreement. The handbook does not cover court-ordered arbitration or any form of binding arbitration.

There are several reasons why communities may want to use ADR to resolve disputes. ADR provides an opportunity for community members to reach creative, custom-made solutions. Because the goal of ADR is to find solutions that satisfy everyone involved, communities can avoid the risk of an "all-or-nothing" result, which often happens with lawsuits. Because everyone must work together to shape an agreement that addresses the concerns and interests of all participants, ADR can also improve relationships between parties in conflict. This can be beneficial because these same parties likely will have to continue to work together, or at least to co-exist, in the future. And although preparing for and using ADR can take time, anywhere from a few months to a few years, it is almost always faster—and much less expensive—than a lawsuit.

ADR is not right for every community or every environmental problem, so each community must decide for itself whether it will be the best approach. Successfully using ADR requires unity and the ability to consider a range of options to resolve your dispute. Because ADR can be part of other community organizing efforts, communities that are interested in ADR must decide how it fits into their overall strategy.

The connection between environmental law and ADR

Environmental laws are laws that are intended to protect people and the environment from the effects of pollution and toxic chemicals, as well as to safeguard natural resources. Environmental laws can be passed at the federal, state, or local level. Sometimes more than one law can apply to a particular environmental problem or situation.

Environmental laws create opportunities for using ADR to address environmental justice problems. For example, if community organizers have information suggesting that a company is violating an environmental law or local ordinance, the company may agree to participate in ADR instead of risking a citizen lawsuit, which can be expensive, time-consuming, and damaging to a company's reputation. Communities can rely on their understanding of environmental laws to persuade polluters to address problems through ADR.

Environmental laws can also be important tools for gathering information. To be successful with ADR, a community needs to arm itself with accurate, credible information. Good information is necessary for a community to be persuasive, and thorough research will help ensure that industry or government officials take the community and its concerns seriously. The more evidence you have about the severity of a problem, and the greater your understanding of the issues involved, the more convincingly you can present the need for the outcomes you are trying to achieve.

Structure of the handbook

This handbook traces the ADR process, as illustrated in the flowchart on the next page. The handbook begins by describing how to think about the problems and who is affected. It explains how to organize a core team of community members into a steering committee and how to conduct research. Because environmental laws are very technical, you will often need to work with experts who can help compile data and build the case for change. Once you have done your homework, this handbook can help you decide whether to try ADR.

If you think ADR is the right choice for your community, the next step is to convince whoever is causing the problems—or has the power to correct them—to participate in the ADR process. Then, you work together to select an ADR approach that meets your needs, and decide whether you want to have someone help guide the process; if so, you select a neutral that is acceptable to all parties. At the same time, you will be developing your negotiation strategy. Finally, you participate in the ADR process, and hopefully reach an agreement with the other side. Negotiated solutions can take time, and it may be a while before you see results—so it is critical to plan carefully for how your agreement will be carried out and monitored. 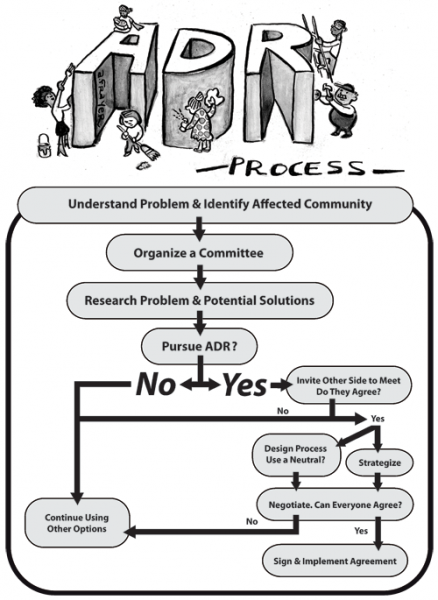 The Story of Maple Plains

Maple Plains is a mid-sized urban community. Most of the families are African-American and Latino, and many are low-income and working-class. The neighborhood has been quite stable for many years and some residents can trace their roots in Maple Plains back about 100 years. The largest and oldest commercial enterprise in the city is the Belvedere Steel Mill, founded in the early 1920s. Some of the community members work at the plant.

Some months ago, a member of the community noticed that a small plot of land in a residential area on the edge of Maple Plains was being used to store unmarked 55-gallon drums. Although the area is fenced off, the drums are causing concern. It is not clear who maintains the site, although there are rumors that people have seen trucks there with "Belvedere Steel" painted on them. The mill is located in another part of the city.

When the drums were first spotted, two were observed to be on their sides, possibly spilling some of their contents onto the ground. Some members of the community went to the city Department of Health about the drums. Their understanding is that the Health Commissioner called someone who had the fallen drums set upright so that they would not leak.

In any case, recently people have spotted more drums at the site, several lying on their sides. Alarmed, members of the community have begun to discuss what they should do about this apparent environmental health hazard. One of them called the Health Commissioner, but was told that the Commissioner had done all that she could absent a demonstrated public health risk.

What the handbook is not

There are many tools and strategies for addressing environmental problems. This handbook focuses only on ADR and does not cover other approaches that communities can use, such as contacting elected officials, protesting, and conducting media campaigns.

Because the handbook is intended to be used by any community, it does not provide detailed information about particular environmental problems or identify local organizations that may be able to help you. It is important to learn about local groups in your area because they might be valuable partners or sources of key information or other support. The U.S. EPA Office of Environmental Justice has regional offices located across the country that can help with environmental justice problems, see http://www.epa.gov/environmentaljustice/whereyoulive/index.html. Many states also have offices of environmental justice that may be able to help. Moreover, many community environmental justice organizers have found that it can be helpful to reach out to neighborhood associations, churches and other religious institutions, colleges, city agencies, or other groups or institutions that could play a role in resolving the problem.

It is important to note that the relationship between tribal governments and the federal government is governed by an entire body of law that is different from state and federal law. For more information, please consult the EPA American Indian Environmental Office at http://www.epa.gov/Indian.

Finally, although this handbook can help you understand and use ADR, it does not provide legal advice. Your legal rights can depend on many different laws, as well as on the specific details of your situation. This handbook is not a substitute for consulting with an attorney.