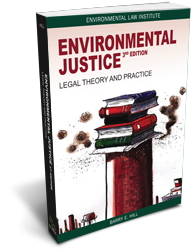 Environmental risks and harms affect certain geographic areas and populations more than others. The environmental justice movement is aimed at having the public and private sectors address this disproportionate burden of risk and exposure to pollution in minority and/or low-income communities, and for those communities to be engaged in the decisionmaking processes.

This revised and updated edition of Environmental Justice: Legal Theory & Practice addresses the legal and social aspects of this important field as well as its relation to sustainable development. From the perspectives of both environmental and civil rights law, the book explores how environmental justice issues are framed, addressed, and resolved in the United States through acts of civil disobedience; federal, state, and local government initiatives; litigation and alternative dispute resolution; and mediation.

Barry E. Hill is an Adjunct Professor of Law at Vermont Law School, where he has taught an environmental justice and sustainable development course for 20 years. Mr. Hill is Senior Counsel for Environmental Governance, Office of International and Tribal Affairs, U.S. Environmental Protection Agency (EPA). Previously, Mr. Hill was Director of EPA’s Office of Environmental Justice from 1998-2007. Prior to that, he was the U.S. Department of the Interior’s Associate Solicitor, Division of Conservation and Wildlife, and the Director, Office of Hearings and Appeals. Prior positions include: Of Counsel to the law firm of Dickstein Shapiro, LLP, where he practiced environmental law; Project Manager of the Superfund Business Unit of ICF International, an international consulting firm; Special Counsel to the Attorney General of the District of Columbia; Legal Counsel to the Inspector General of the U.S. EPA; Law Secretary to the Deputy Administrative Judge of New York City (Criminal Division); and an Assistant District Attorney in Brooklyn, New York.

Mr. Hill has been a Visiting Scholar at the Environmental Law Institute from 2010 - 2012. Mr. Hill has lectured in the Middle East, Africa, South and Central America, and the Caribbean on the following topics: establishing an environmental law and policy framework for national governments; environmental justice and sustainable development; capacity-building training in environmental law for judges, prosecutors, government regulators, citizens, and the bar; citizen involvement in the environmental enforcement process; and the impact of global warming on indigenous populations. In 2011, Mr. Hill delivered the Distinguished Lecture for the Trinidad & Tobago Environmental Commission, and the Supreme Court of Trinidad & Tobago.

In 2011, Mr. Hill was presented the “Distinguished Alumni Award” by Brooklyn College of the City University of New York for his “commitment to environmental justice and sustainable development, and pioneering leadership in the field of environmental law and policy in the U.S. and abroad.”

In 2001, Mr. Hill was presented the “Award for Distinguished Achievement in Environmental Law and Policy”   by the American Bar Association for his work -- teaching, research, and leadership -- in the areas of environmental justice and sustainable development, and environmental law and policy.

Since 1999, Mr. Hill has been a Fellow of the American Bar Association’s American Bar Foundation in recognition of his professional accomplishments, distinguished service, and commitment to the study of law and legal research.

Mr. Hill received his B.A. degree in Political Science from Brooklyn College; M.A. degree in Political Science from Howard University; and a J.D. degree from the Cornell University Law School. In 2012, Mr. Hill received an honorary Doctor of Laws degree from the Thomas Jefferson School of Law since he “steadfastly fought environmental injustice by taking action to decrease environmental risks and to raise awareness of these issues, and by providing communities with the appropriate tools needed to address serious environmental problems.”