The Constitutional Question to Save the Planet: The Peoples' Right to a Healthy Environment 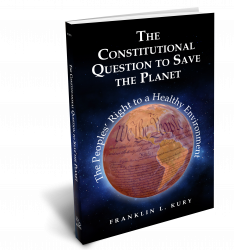 More than 50 years ago, Franklin Kury drafted and championed an Environmental Rights Amendment to the Pennsylvania Constitution, which was enacted on Earth Day 1970 and ratified by Pennsylvania’s voters a year later. In the half century since then, climate change has become the overrid­ing threat to the environment of the planet. In this book, Franklin Kury expands upon the story of Article I, Section 27, to demonstrate how its principles can be the basis for address­ing climate change in the rest of the world. The story concludes with a call for the federal government’s leadership to seek a national environmental rights amendment to the U.S. Constitution and a treaty to expand its reach to the international community.

Pennsylvania’s environmentalists, lawyers, and policymakers will enjoy this first-hand account of how their state elevated a clean environment to a constitutional right. But many others will ponder what their own states might do, and perhaps even rally around the bold case Franklin Kury makes here for a federal constitutional amend­ment. That would be a hard slog, but now that our national government is rebuilding its environmental conscience, what better time to start the discussion?
—Christine Todd Whitman, Governor of New Jersey (1994-2001) and U.S. Environmental Protection Agency Administrator (2001-2003)

Even now, as we face the existential crisis of climate change, . . . Congress has yet to pass legislation that truly takes on this threat. But it is an existential threat we face. And it’s with this threat in mind that Franklin now presses for an environmental amendment to the U.S. Constitution, the same type of amendment he pushed through in Pennsylvania, to protect our nation’s natural resources—our lands, waters, air, fish, and wildlife.
—Tom Udall, U.S. Senator of New Mexico (2009-2021)

Franklin Kury has given us the intriguing inside story of an important Pennsylvania le­gal, policy, and social development—the “Environmental Amendment” to our Consti­tution. . . . It will give scholars, historians, policymakers, and citizens alike important in­sights and good guidance for the next 50 years. For this book, and for his decades of wise environmental leadership and respected political activism, Frank deserves our thanks.
—Tom Ridge, Governor of Pennsylvania (1995-2001)

Franklin Kury’s work is essential to support the continued and collective effort to en­sure the right to a safe and healthy environment. The Constitutional Question to Save the Planet provides not only a history lesson, but it also offers an essential road map for the future.
—Robert Casey, Jr., U.S. Senator of Pennsylvania

Franklin Kury’s book is the story of the evolution of a pioneering constitutional provision that, although nearly forgotten for most of a half century, now through judicial reinterpretation, offers the nation and the world a promise of an envi­ronmental commitment that could save the planet over the next half century. How this commitment came to be is the subject of Kury’s firsthand account, and both the language of the Environmental Rights Amendment and the interpreta­tive lessons learned are worthy of widespread emulation.
—Michael Blumm, Jeffrey Bain Faculty Scholar and Professor of Law at Lewis & Clark Law School

The father of Pennsylvania’s potentially revolutionary constitutional right to a healthy environment tells the compelling story about the origin of the Environ­mental Amendment, its application in Pennsylvania, and how a similar consti­tutional right at the federal level could help us tackle the greatest environmental existential threat ever, climate change. A must-read for students of environmental politics and history.
—Ann Carlson, Shirley Shapiro Professor of Environmental Law and Faculty Co-Director, Emmett Institute on Climate Changeand the Environment, UCLA School of Law

Protecting the environment, unquestionably the most important issue of our times as we deal with climate change, requires both a state and federal commitment. Pennsylvania, under the strategic leadership of Franklin Kury in his tenure in both the state house and senate, passed a constitutional amendment to do so. It is now time to add an amendment to the U.S. Constitution. Kury uses this well written and well documented book to explain the history of environmental activism at the state and national level, concluding that only the Twenty Eighth Amendment to the Constitution can ultimately protect our streams, our air, and our lands.
—Shirley Anne Warshaw, Ph.D., Director, Fielding Center for Presidential Leadership Study, Gettysburg College

In his book, Franklin Kury chronicles his seminal efforts to amend Pennsylva­nia’s Constitution so that it now includes the increasingly important Environ­mental Amendment. Thanks to Kury and others, this constitutional amendment has effectively changed the landscape of Pennsylvania, and serves as a blueprint for the United States in our dawning realization that the health of our nation depends on the health of our environment.
—Eliza Griswold, Pulitzer Prize-winning author of Amity and Prosperity: One Family and the Fracturing of America

America needs constitutional protections to safeguard our environment, includ­ing our climate system. Frank Kury sets forth a detailed and compelling case for a national environmental bill of rights amendment to our Constitution, and the need for every state to guarantee that all citizens have an environmental bill of rights . . . America cannot wall off from the impacts of the climate crisis because we are now suffering from inhumane heat, and losing entire cities to intense fires and extreme flooding. Kury presents a compelling case for overarch­ing constitutional protections in the face of the existential threats we face from climate change.
—Larry J. Schweiger, Retired President of National Wildlife Federation