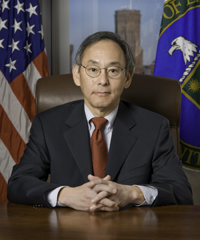 The Environmental Law Institute is pleased to announce that it will honor Dr. Steven Chu with the 2011 ELI Award for Achievement in Environmental Law, Policy, and Management. The Award recognizes Dr. Chu for his visionary leadership as a scientist and advocate for attention to the issues of climate change and the need for carbon-neutral renewable sources of energy, as well as for his leadership of the U.S. Department of Energy and its ambitious agenda to accelerate deployment of new energy solutions. The Award will be presented at the 2011 ELI Award Dinner, which will take place on October 19 at the Omni Shoreham Hotel in Washington, DC.

The Award also recognizes Dr. Chu’s creation of valuable partnerships with India and China on research to advance energy efficiency and technology as well as his contribution to the investigation of the causes of the Deepwater Horizon Oil Spill.

“This is a critical time to recognize the importance of scientists to the nation’s ability to understand tough environmental problems and devise solutions,” according to ELI President, Leslie Carothers. “Debate and criticism are essential, but lack of respect for facts and attacks on scientists bearing unwelcome opinions are an unacceptable part of today’s public discourse.”

Dr. Chu is a co-winner of the 1997 Nobel Prize for Physics. Prior to serving as Secretary of Energy, he directed the Lawrence Berkeley National Laboratory, a U.S. Department of Energy National Laboratory. Under his leadership the Laboratory was a center of research into biofuels and solar energy technologies. Dr. Chu spearheaded the laboratory’s Helius project, an initiative to develop methods of harnessing solar power as a source of renewable energy for transportation. He also taught at the University of California as a Professor of Physics and Professor of Molecular and Cell Biology. Previously, he held positions at Stanford University and AT&T Bell Laboratories.