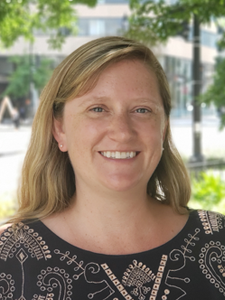 Melodie has been working in the fundraising and event management field for almost 20 years. She has served ten years with ELI's Development Department, working her way up from Development Associate to Senior Manager to Director of Development. In June 2019 she was promoted to her current role as Vice President for Development & Membership.

After graduating from Iowa State University with a B.S. in Journalism and Mass Communications, Melodie began her career fundraising for various campaigns from the state level all the way up to Finance Director on a successful U.S. Senate campaign where she was responsible for raising almost $1 million through individual donors, Labor PACs, and events. In 2007 she moved to Washington, D.C. and started her career in non-profit fundraising, working for 4 years in fundraising and events at the American Constitution Society. Since joining ELI in 2011, she has built integral relationships throughout ELI’s leadership and membership communities and has for years been the driving force behind what is generally regarded as the premier award event in our field. Additionally, she has been an organizing and catalyzing presence in relation to such important initiatives as ELI WELL (Women in Environmental Law and Leadership) and our new Emerging Leaders program. She now leads a team of seven people engaged in ELI's membership, education, grants and fundraising.