What’s for Lunch on Doomsday?

Have you ever heard about the Svalbard Global Seed Vault? It might look like something from the future, but this very important structure can be found today roughly 1,300 kilometers (about 800 miles) north of the Arctic Circle, blasted 130 meters (roughly 430 feet) deep into a mountain. Designed to withstand doomsday scenarios, what valuable treasures might such a building hold? The answer is simple but may be surprising: seeds! 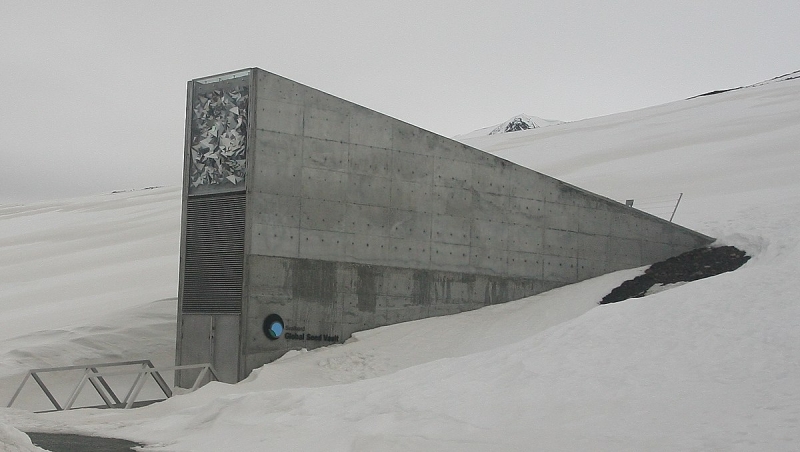 The impressive building is located on Svalbard, a Norwegian island near the North Pole, and has the capacity to store 2.25 billion seeds from different plant species around the world. To understand why someone would go through the effort of building such a facility requires us to travel thousands of years back in time. Throughout the history of agriculture, farmers have collected and replanted seeds. Through this process, and with the help of natural mutations, a vast assortment of crop varieties has evolved, often referred to as traditional varieties or heirloom crops. A wealth of plant genetic resources, which have actual or potential value for food, can be found in the seeds of these traditional varieties.

Sadly, about three-quarters of the global genetic diversity in agricultural varieties has been lost over the last 100 years. The primary reason for this erosion is the replacement of traditional varieties with modern uniform crops. When farmers stop cultivating traditional varieties, we lose both the varieties themselves and the genetic information they contain. The rapid decline in wheat varieties cultivated in China during the mid-1900s is illustrative. In 1949, China had almost 10,000 different varieties of wheat, but 20 years later, only 1,000 varieties remained in use.

“Monoculture agriculture” is occurring in almost every part of the world, but by collecting and saving seeds from different varieties and species, seed banks like the Svalbard Global Seed Vault can help mitigate the rapid loss of traditional varieties for the benefit of present and future food production.

Seed banks aren’t the only way to conserve plant genetic resources. On-farm conservation, typically found on small-scale farms, preserves traditional varieties through their cultivation and use. The preservation of “crop wild relatives,” which are the wild cousins of the agricultural crops we use today, is another means for conserving plant genetic resources.

There are a number of different approaches to counteract the loss of plant genetic diversity, much of which comes from states’ commitments under the International Treaty on Plant Genetic Resources for Food and Agriculture. This multilateral treaty was adopted under the auspices of the United Nations Food and Agricultural Organization (FAO) and entered into force in 2004. The Treaty currently has 146 contracting parties, including the United States and the European Union. Many important topics are covered by this treaty, including different means and goals for preservation of traditional varieties and how to share benefits from the development of new crops and farmers’ rights. The Global Seed Vault on Svalbard is one of many projects initiated within the framework of the treaty.

Other efforts to save seed diversity include the regulation of seeds. In the European Union, many have voiced concerns that legislation on the marketing (i.e., selling) of seeds poses an obstacle to the on-farm conservation of traditional varieties. The European Commission has attempted to remove these obstacles by implementing special rules for certain traditional varieties, but the loss of diversity continues. This suggests that the importance of seed diversity should be considered in all legislation potentially affecting it.

The wealth of genetic resources found in traditional seeds took thousands of years to develop, and society would be at a tremendous loss without them. The next time you see heirloom tomatoes or peppers for sale at your local food store, be thankful that seeds from this particular variety very well could be stored in a place far north, ensuring us a nutritious lunch—even on doomsday.