A New Version of Russian Roulette

When Russian troops swarmed over the border last February, Ukraine became the first country possessing nuclear power plants to be invaded. The attackers seized several of the generating facilities and temporarily entrenched around the mothballed reactor at Chernobyl. At this writing, Moscow’s intentions with regard to the operating power plants was unclear. 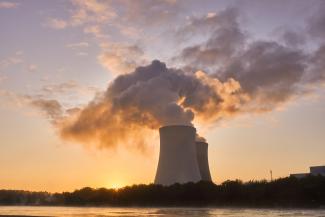 But the moves raised a red flag with regard to the claims of a large section of the environmental community that nuclear power is a difficult but necessary technology in the transition to carbon-free energy. We have no choice but to accept it, goes this line of reasoning, if we are to avoid dangerous climate change. However, as we are seeing in Ukraine, these facilities are uniquely vulnerable in war time; thus we need to add a national security component to the environmental calculation.

My views on nuclear power, and eventually plants’ attraction as military targets, were shaped by several dramatic encounters early in my career. The first was a speech I attended at Princeton in 1975. Ralph Nader would give a fiery address condemning this source of electricity, citing the environmental and weapons proliferation risks. But just before the start of the lecture, Henry D. Smyth sat down behind me. The author of Atomic Energy for Military Purposes, Smyth had worked back stage on the Manhattan Project, whose history first received an audience in what became known as the Smyth Report, and he also had a starring role in the subsequent global spread of atomic power for electricity generation.

I recognized Nader’s prominent antagonist­ on the nuclear stage—and was treated to a Greek dialogue. Aeschylus is credited with the introduction of the second actor in a play, “making the dramatization of a conflict possible,” according to Wikipedia. And conflict there was. Smyth launched a stream of soto voce rebuttals of the speaker on all points of fact. I thus was schooled on the two sides of the debate by top experts who were poles apart.

I concluded that Smyth hadn’t been able to upstage Nader. Fission was a technology that we had yet to master, including overlapping issues of dangerous long-term waste; weapons proliferation; and environmental safety.

Just four years after this scene, a reactor nearly caused a serious radioactive release 110 miles upwind of my apartment in Princeton. The containment at Three Mile Island (barely) worked, but the partial meltdown so nearby—reaching a lengthy climax with a potentially explosive hydrogen bubble—made real the dangers of this power source.

Finally, reactors’ extreme vulnerability in time of war entered my thinking precisely two years later, when I was editor of the U.S. diplomats’ professional magazine, the Foreign Service Journal. Sigvard Eklund stopped at the State Department prior to visiting the disabled reactor on the anniversary of the accident. I was invited to meet him.

Eklund was director general of the International Atomic Energy Agency, and for 20 years had been promoting “Atoms for Peace,” the slogan President Eisenhower had used in establishing IAEA within the UN system. Eklund was known as the father of nuclear safeguards, an accounting and security system that is supposed to prevent signatories of the Nonproliferation Treaty from diverting fuel or waste to bomb use—a condition to receiving IAEA assistance in building power plants.

We talked on the record for over an hour. Eklund was like a bulldog: He denied that weapons programs had been enabled by countries first gaining reactor technology. Indeed, the safeguards system had never failed humanity. “There is no direct connection between nuclear power and nuclear weapons,” he insisted. As a physicist, he felt that on the issue of safety, there would never be another TMI. “We have not had a single case of a fatal accident,” he reminded. Further, the engineering for long-term storage of fission byproducts had also been solved. On these three key issues, he said in emphasizing a steady saga of progress, the public needs “a much more positive attitude.”

We then discussed an article in the just-published April 1981 issue of Scientific American, titled “Catastrophic Releases of Radioactivity.” The authors’ worst-case scenario was an atomic warhead detonated on a reactor. “The nuclear attack turns the reactor into a devastating radiological weapon,” they wrote. “Because the radioactivity from the reactor is relatively long-lived . . . the time a given area would remain contaminated is significantly greater.” One such shot could make uninhabitable thousands of square miles—an entire region—for generations to come.

Eklund agreed with the authors and quickly added that despite the ban on atmospheric tests, humanity would benefit from an occasional atom bomb test blast so people could witness the gravity. “I regret very much that the experience of these explosions has been forgotten by the public,” he lamented.

Before I was able to write up the interview, Israeli F-16s took out Iraq’s newly built Osirak reactor—lest it be used to produce weapons material, Israel said. It was a huge sign of disrespect for the safeguards system. There was no release of radioactivity—the bombs were TNT and the reactor had yet to be fueled. But it was a vivid demonstration of vulnerability. As a shaken Eklund told reporters, “I do not think we have been faced with a more serious question than the implications of the Israeli raid.”

For me, the war in Ukraine brings up to date a drama older than these long-ago events, one as ancient as Prometheus, the god of fire but also of trickery. If nuclear power is needed to achieve net-zero goals, society is going to have to accept the national security “implications.”