In 1970, amendments to the Federal Water Pollution Control Act introduced state “Water Quality Certifications” into federal environmental law. This provision, recodified as Section 401 of the Clean Water Act in 1972, provides that states have the opportunity to review applications for any “federal license or permit to conduct any activity” which may result in any discharge to the waters of the United States, and to certify that any such discharge will comply with, among other things, state water quality standards for such waters. Section 401 further provides that state certifications shall set forth any limitations needed to assure that applicants will comply with those standards and with “any other appropriate requirements of state law set forth in such certifications,” and that such limitations would become a condition on any federal license or permit subject to the law. 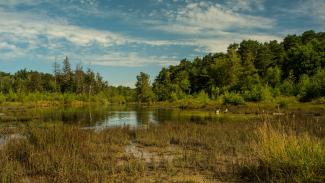 Section 401 certification has been carried out by states for almost 50 years under regulations adopted by EPA in 1971. States have used their certification authority to deny or condition approval for various activities, including federal licensing of dams, construction of pipelines, issuance of dredge and fill permits by the Corps of Engineers, and other activities affecting their waters.

In 1994, the U.S. Supreme Court considered the scope of Section 401 in a case in which the state of Washington had imposed minimum in-stream flow requirements on a FERC-licensed hydroelectric project. The proponents of the project contended that 401 certification authority applied only to conditions on a discharge itself and not to such conditions on the licensed activity as a whole. In PUD No.1 of Jefferson County v. Washington Dept. of Ecology, the Supreme Court ruled 7-2 that a plain textual reading of Section 401 sustained the state’s imposition of the condition “on the activity as a whole.” Dissenting (for himself and Justice Scalia) Justice Clarence Thomas maintained that the majority was wrong, and that states’ authority is limited only to direct conditions on a discharge.

And so things stood for the next 25 years.

In 2019, the Trump administration proposed to reverse the Supreme Court’s interpretation of Section 401 by adopting new regulations. The proposed rule specifically adopted Justice Thomas’s view of the statute, contradicting the result in PUD No. 1. The preamble asserted that EPA staff had “for the first time conducted a holistic analysis” of the law and had concluded that the Supreme Court’s majority decision was based on an “infirm footing” and should be discarded (84 Fed. Reg. 44097). In June 2020, EPA finalized the rule, expressly ratifying Thomas’s dissent. In doing so, the agency relied in part on a particularly aggressive version of the Chevron doctrine of administrative deference, known as Brand X deference, after a Supreme Court decision allowing the Federal Communications Commission to adopt a rule contradicting a prior federal court’s interpretation of a federal statute.

Environmental groups filed suit to enjoin the Trump administration’s 401 rule, and various parties joined the litigation on each side. The Biden administration sought to have the rule remanded to EPA for reconsideration. On October 21, 2021, the U.S. District Court for the Northern District of California vacated the new rule and remanded it, finding that “the revised scope of certification that EPA promulgated takes an antithetical position to PUD No. 1 without reasonably explaining the change” and citing indications that “the rule contravenes the structure and purpose of the Clean Water Act.”

Various parties appealed, and months after the appeal was docketed in the Ninth Circuit, a group of appellants asked the Supreme Court for an emergency stay of the district court decision. On April 6 of this year, the Supreme Court in an unsigned four-sentence ruling in Louisiana v. American Rivers stayed the district court’s decision and reinstated the Trump rule pending the disposition of all appeals (including final resolution of any future petition for certiorari from a future Ninth Circuit decision). Justice Kagan, writing for four members of the court in dissent (including Chief Justice Roberts) summarized the extraordinary effect of the Supreme Court’s “shadow docket” decision:

By nonetheless granting relief, the Court goes astray. It provides a stay pending appeal, and thus signals its view of the merits, even though the applicants have failed to make the irreparable harm showing we have traditionally required. That renders the Court’s emergency docket not for emergencies at all. The docket becomes only another place for merits determinations—except made without full briefing and argument.

Justice Thomas, although on the dissenting end of PUD No. 1, is now the only member of that court still serving. His interpretation of 401 has for the present prevailed—and if Justice Kagan is correct, will likely determine its ultimate fate.

It is worth noting that Thomas also wrote the majority opinion in Brand X, which EPA relied on to allow its interpretation to supplant that of the PUD No. 1 majority. Although Justice Thomas announced in 2020 in another case that he no longer believes in the validity of the Brand X doctrine, this should prove no obstacle, as his 1994 view of Section 401 owed nothing to agency deference.