The EPA Pith and the Law Pendulum

I met William D. Ruckelshaus a year after the Saturday Night Massacre, and 18 months after he left the U.S. Environmental Protection Agency (EPA) as its founding administrator. I was a reporter for the Daily Princetonian, and he was on campus to give a talk. I recognized that here was a true American hero. Nine years later, Ruckelshaus would return to EPA for more heroics: restoring the Agency to its original sense of idealism and high purpose.

It is comforting to think of men and women who were inspired by Ruckelshaus’s sainted example as still the pith of the Agency’s workforce. Certainly the EPA staffers whom I’ve met over the last 30 years are dedicated to the high public purpose invoked by Ruckelshaus at the Agency’s founding 48 years ago. That is a venerable period for a government department. So it is both sad and somewhat startling to hear the founding Administrator say that his successor “is pulling that whole apparatus down,” as Ruckelshaus was quoted in the Washington Post earlier this year. 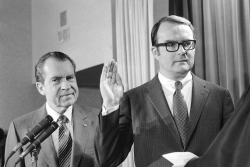 ELI’s policy magazine, The Environmental Forum, is now 35 years old, and by far the most popular article it ever published — to judge by reprint requests and other indicators — was Ruckelshaus’s cover story in the November/December 1995 issue. “Stop the Pendulum” was the headline, with our cartoon showing an environmental professional threatened by a swinging blade as in Poe’s classic thriller.

The article ran a year after Newt Gingrich’s takeover of the House of Representatives with his Contract with America, and Ruckelshaus sounded a warning to the 104th Congress. “We recognize, as perhaps the newer members of Congress do not, that the current rhetorical excess is yet another phase in a dismaying pattern,” Ruckelshaus wrote. He portrayed the anti-environmental swing of the early nineties as a reaction to the “pro-environmental excesses of the late eighties, which was prompted by the anti-environmental excess of the early eighties,” and so on, all the way back to NEPA. “The new Congress may believe that it is the vanguard of a permanent change in attitude toward regulation, but unless the past is no longer prologue, the pendulum will swing back, and we will see a new era of pro-environmental movement in the future.”

That prospect wasn’t completely rosy, in Ruckelshaus’s view. Such swings, even those that benefit the environment, are by their nature temporary and are followed by opposite reaction to the detriment of public health and the public fisc, not to say also to the health of our democracy. He urged instead that policymakers concentrate on making smooth progress toward well-defined goals in a single unified statute governed by a single authorizing and a single appropriating committee in each house of Congress.

What was then happening in reality was far different. In 1995, politicians opposed to environmental protection were painting a picture of “a bureaucracy run amuck.” The result was “battered agency syndrome,” in Ruckelshaus’s view. Given that pollution was obviously under better control, he wondered, “Why is EPA now the Agency everyone loves to hate?” Those observations, readers well know, could well be made today.

A swinging pendulum is bad for the environment. It is also bad for business. “Regulators exist to give certainty to those that they regulate,” former EPA Administrator Scott Pruitt told staff when he started. But according to NPR, “The Trump Administration has tried to undo much of what was put in place by the previous administration. In fact, Gina McCarthy, who headed the EPA under [President] Obama, says that seems to be one of Pruitt’s top priorities.”

“I don’t want every administration to come in and think that their only job is to undo the one that happened before,” she said. “We cannot have constant changes to the signals we send to business and the public in the United States about what we should be doing to protect public health and the environment.’” The Cato Institute’s Peter Van Doren added, “Knowing what the rules are, and that they don’t change that often, strikes me as something we all should agree to.”

The author of “Stop the Pendulum” says that, today, “It’s some of the same stuff. And it’s really hard for the people who stay there to function when the administrator’s not sympathetic to the mission.” Ruckelshaus observed that the problems at the Agency are not the result of some deep-state bureaucrats. Rather, “It’s the people that have been brought in that are taking the steps that are in many respects aimed at tearing down the whole apparatus that was set up over 40 years to protect public health and the environment.”

Pruitt is gone, and longtime environmental lawyer Andrew Wheeler is acting. But the deregulatory policy of the Trump Administration comes from the White House and is not likely to stop because of the change in leadership at EPA. After all, one of the president’s first acts was to sign his controversial executive order requiring two rules to be axed for each new rule added.

Controversy is not essential to environmental progress. As I wrote in the October 12, 1974, edition of the Daily Princetonian, quoting Ruckelshaus’s inspiring speech: “Energy and conservation don’t oppose each other. They are different sides of the same coin.”