Out with the Old, in With the New 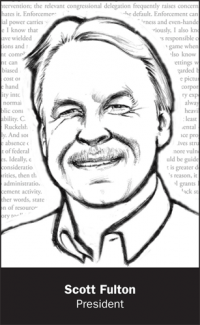 As we are moving from an aggressively deregulatory period to one in which regulation is more likely to be seen as important in advancing environmental policy, let’s take a quick look at what to anticipate from the three branches of the federal government.

We should expect a number of early actions by Team Biden, including rejoining the Paris Agreement, rescinding Trump executive orders, freezing regulatory actions pending in the Federal Register, and filing requests for stay or repositioning in litigation involving the defense of the outgoing administration’s rules. Some other actions, such as suspension of rules via the Congressional Review Act, await clarity on control of the Senate. Senate control will also be significant for purposes of those many appointments requiring confirmation, and with respect to congressional oversight of the new administration.

Looking at the Congress, the situation in the House of Representatives is settled. Despite some Republican gains, the Democrats will retain control. Regarding the Senate, what’s clear at the time of this writing is that in the next Congress the Senate will include at least 50 Republicans. The only path to Senate control for the Democrats is to win both of the run-off elections in Georgia scheduled for January 5. In that case they would have 50 seats, with Vice President Kamala Harris being the tie-breaker for purposes of determining majority for leadership and voting.

If the Republicans retain the Senate, the path for legislation supportive of Biden administration priorities obviously becomes arduous, although GOP leaders may see themselves as somewhat less constrained in the absence of a Trump White House. It bears remembering that a number of leading Senate Republicans were advocates for climate legislation in the pre-Trump days.

If the Democrats flip the two remaining Senate seats, then the dynamics around legislation would also flip. And the Congressional Review Act — used on 13 occasions in the early days of the Trump administration to invalidate Obama-era environmental rules — would come into play. But it cannot be assumed that an equally divided chamber with a vice presidential tie-breaker will provide anything approaching carte blanche legislative opportunity. Indeed, on questions like climate change, it may prove difficult to keep Democrats from fossil fuel-geared states in the voting fold for more ambitious legislative options.

In view of this, I am of the mind that regardless of what happens in the Georgia run-offs, environment-related legislation over the next two years will likely need to aim toward the middle to have hope of passage. This may mean, for example, that the most promising climate legislation will center on market-based drivers — think carbon tax and renewable energy incentives. Another pass at additional PFAS measures seems entirely possible, since White House opposition seems to have been the primary reason that House Bill 535, which would have sealed the deal on PFAS status as a hazardous substance under the Superfund law and would have compelled regulation under the Safe Drinking Water Act, did not move forward.

To the extent there is additional bandwidth for environmental legislation (a fairly big “if” in my view), other lawmaking in such a setting might include an update to the Resource Conservation and Recovery Act to align it better with circular economy thinking, pushing more secondary material away from destruction and toward beneficial reuse, or possibly to reach in the direction of growing concerns about plastics and microplastics.

Turning to the courts, much has been made of the remaking of the federal judiciary through Trump appointments and how this might influence judicial decisions on the environment. I am reminded here of the conservative judges I encountered in my early years as a litigator at the Department of Justice and the amazingly pro-environment decisions that they rendered.

While one might think that political philosophy, or the loyalty engendered by a lifetime appointment, would prove important to judicial decisionmaking, my sense is that, once on the bench, a much bigger idea sets up for most judges — the sacredness of the pursuit of justice, fulfilling the rule of law, and serving as an independent, co-equal branch of government, effectuating those exercises of executive and congressional authority that are legitimate and checking those that are not. For this reason, I am ultimately less pessimistic that the courts will prove an important fly in the environmental ointment.

Time will tell of course, and this next bit of time will be interesting for sure.

Out with the Old, in With the New.

Simply by virtue of the gas inside them, discarded aerosol cans are treated as hazardous waste under the Resource Conservation and Recovery Act (RCRA). But these same cans, when disposed of by consumers, are treated as household solid waste, meaning they can be managed or recycled differently, including ways that involve substantial steel and aluminum recovery from municipal waste management.

Waste Not, Want Not — An Instruction for Regulatory Reform?

At ELI, we have adhered to a centrist approach on the question of regulatory reform, seeing our current system of environmental protection as neither fatally flawed nor beyond improvement. But the question remains where to aim the reform effort.

A suggestion: waste recycling activity. Why? Because the RCRA program has become increasingly difficult to reconcile with sustainability ideals.

There are a number of different takes on what is meant by environmental sustainability, but I like the one that derives from Section 102 of the National Environmental Policy Act: a key goal of today’s society is to avoid the irreversible commitment of resources. That way, tomorrow’s needs can also be met. At first blush, RCRA would appear to be complementary in thrust, since, it is, after all, called the Resource Conservation and Recovery Act. But the regulatory system that emerged and has prevailed under the statute has always been preoccupied with guaranteeing proper disposal, and this preoccupation has at times pushed deployable secondary material toward end of life rather than recycling and reuse.

This orientation is understandable, given where we started. The initial National Priorities List under Superfund was populated with sites around the country that were the product of chemical reclamation activities gone awry. Many of the cases that I litigated back in the 1980s involved such circumstances. Take U.S. v. Monsanto, which involved the Bluff Road site in South Carolina. That site was envisioned by its operators as a collection and staging area for reclamation of organic chemicals. Nearly 10,000 drums would make their way to the site, but, as often seemed to be the case in those days, the operators could not keep up with the volume of material that they received and were unsuccessful in finding markets for repurposing the waste. As a result, the drums never left, the containers corroded, and a chemical stew contaminated land and groundwater, resulting in millions of dollars of liability and cleanup.

RCRA, with its cradle-to-grave system and stringent requirements for hazardous waste management and disposal, was in part intended as a “never again” response to scenarios like these. It presumed mismanagement and then applied a belt and suspenders approach to overcome it.

Fast forward to the present. RCRA has largely been successful in reining in industrial chemical waste mismanagement. Though Superfund continues to chug along in cleaning up legacy sites, very few new NPL sites have emerged based on behaviors post-dating the promulgation of RCRA’s regulations. Indeed, the chemical manufacturing and waste management sectors, having labored under RCRA controls for decades now, have largely internalized these controls in their compliance management systems.

The question now is whether RCRA should be turned more decisively in the direction of resource conservation and recovery — particularly in view of the emergence of sustainability and smart materials management as core objectives in much of the business community. At their root, these objectives are grounded in conservation thinking, focused on designing products with end-of-life in mind and strong reuse and recycling programs, allowing for an increasingly circular economy.

The difficulty is that the RCRA program in its current form has proven a straight jacket when it comes to recycling. The flip switches that operate around the questions of whether a material is a waste and whether a waste is hazardous, coupled with the absence of clear statutory authority to develop customized programs for recyclables, drive resource loss rather than reuse.

Take, for example, what is happening in the retail sector with discarded aerosol cans. By virtue of their propellant, these hit the trip wire for RCRA ignitability and are treated as hazardous waste. This waste stream accounts for nearly half of the RCRA-regulated material in the retail sector and drives the status of retail stores as RCRA large-quantity generators. Awkwardly, these same cans, when disposed of by consumers, are treated as household solid waste rather than hazardous.

Treated as hazardous waste, the fate of the material is certain — the vast majority is incinerated. Apart from the enormous cost of this approach, there is a sustainability tragedy — both the cans and the propellant are recoverable and either recyclable or reusable, the cans for their metal and the propellant as fuel. It seems virtually assured that reharvesting these materials can be undertaken in an environmentally protective manner.

Can we work together to find a better path for waste streams like this? To me, that sounds like smart reform, anchored by the sustainability ideal.

The Future of Pharmaceutical Waste Regulation

Washington, DC (and via webinar)

Washington, DC (and via teleconference)

Washington, DC (and via teleconference)

This title is out of print. There are no plans for a subsequent edition.