ELI and the Indonesian Center for Environmental Law have been diligently carrying out a training project in the archipelago to help judges become a player in the fight against deforestation and the path toward sustainable development.

However, these natural resources are increasingly under threat from the pressures of a growing population and expanding, often unlawful economic activity that together are diminishing Indonesia’s rich biodiversity, threatening the health and livelihoods of communities that depend on natural resources, and releasing enormous amounts of carbon into the atmosphere.

To address these issues, there is a promising new legal tool in Indonesia enabling civil society organizations and the government to file claims to hold responsible parties liable for environmental damages. However, many judges lacked the knowledge and capacity to ensure this authority was effectively applied.

In response to requests from the Supreme Court’s Working Group for Judicial Certification on the Environment for support in its efforts to certify judges to rule on environmental issues, ELI’s Judicial Program and its collaborators developed a capacity-building curriculum to train the country’s judiciary to be a critical part of the efforts to improve environmental quality. ELI and the project team launched this curriculum in Pekanbaru, Indonesia, this summer.

ELI and partners convened a five-day workshop that brought together 38 judges from different regions of the country as well as three Supreme Court justices to discuss economic valuation, restoration, and compensation of environmental damages.

The workshop emphasized the role the environment plays in human well-being and economic prosperity, as well as limitations to ecosystem resilience in the face of degradation. Sessions addressed topics such as principles of environmental science, valuation of natural resources in the context of compensation and restoration, scientific evidence and uncertainty in the courts, standards of liability, and mechanisms for ensuring that judicial decisions are carried out.

The participants also had the opportunity to attend a field trip to a peat ecosystem affected by fires, providing the judges with a unique opportunity to observe the complex dynamics of damage and degradation to ecosystem services and to conduct experiments illustrating the challenge in collecting scientific evidence in these case.

By transferring critical knowledge to the judiciary to understand and address liability for environmental damages, this project will improve environmental quality in Indonesia by promoting environmental accountability through judicial enforcement. Ultimately, the benefits will include reduced deforestation and greenhouse gas emissions and improved biodiversity and quality of life, especially for vulnerable communities.

The curriculum draws on the local expertise of partners at ICEL. Judge Merideth Wright, a Distinguished Judicial Scholar with ELI and a former environmental judge for the state of Vermont, and Judge Anders Bengtsson of the Växjö Land and Environment Court in Sweden are contributing their experience as members of the judiciary.

ELI Visiting Scholar Carol Jones lent her expertise on the economics of valuing damage to the environment and Alejandra Rabasa, director of ELI’s Judicial Program, discussed scientific evidence and uncertainty.

This project is generously supported by the Swedish Postcode Foundation, an organization dedicated to seeking long-term solutions to local and global challenges.

Eight years after the Deepwater Horizon oil spill, restoration activities in the region remain ongoing. ELI’s gulf team has focused recent efforts on helping project trustees strategically coordinate their activities to make the most of time and material and financial resources.

In March the team released a paper that surveyed some of the tools available to Deepwater Horizon natural resource damage assessment trustees to help coordinate their activities.

As a follow up to this work, the Institute recently released Coordination in the Natural Resource Damage Assessment Process: Project Planning and Selection. Building on previous research, this guide describes some additional tools that are available during project planning and selection that could help coordinate the trustees’ activities internally within the NRDA program (namely, among the Trustee Implementation Groups) as well as with other entities. This paper focuses on project screening criteria, strategic frameworks, and joint restoration.

When selecting projects for their restoration plans, the TIGs use a systematic screening process. The TIGs could develop additional project screening criteria that will promote coordination with external entities, other TIGs, or both. Examples could include encouraging or favoring projects that leverage funds from outside sources, are consistent with existing plans or efforts, or leverage activities of other TIGs or external entities.

Strategic frameworks are another tool available during project planning and selection to help coordinate activities.

In 2017, the region-wide TIG released four strategic frameworks — one each for birds, marine mammals, oysters, and sea turtles. Frameworks such as these provide a useful starting point. They ensure that trustees and others have the same information about the resource.

Another tool that may be useful in helping the TIGs coordinate internally during project planning and selection is joint restoration planning. This type of planning could be an effective way for TIGs to coordinate across restoration areas.

In response to demand for unbiased analysis, the Institute has been at the forefront of educating members and the public on impending changes in state and federal government policies and judicial action through Breaking News webinars, allowing the Institute to provide answers on the most recent relevant topics affecting environmental law in a timely fashion.

The first Breaking News webinar reflected on Justice Anthony Kennedy’s retirement from the Supreme Court. For the past three decades, Kennedy had been a crucial swing vote on a variety of issues including the environment. His retirement came at an especially crucial time, as the Supreme Court’s 2019 docket includes cases that cover a litany of environmental issues. Attracting over 350 viewers, the webinar featured expert panelists exploring the influence Kennedy had on environmental law, and what his departure from the court could mean for the future.

The second Breaking News webinar discussed comprehensive changes proposed by the Department of the Interior and National Oceanic and Atmospheric Administration in how the Endangered Species Act is implemented.

These regulations and policies address the species listing process, including the definition of “foreseeable future,” critical habitat designations, and the Section 7 process that directs all federal agencies to consult with the Fish and Wildlife Service when any agency action might affect an endangered or threatened species.

This panel provided an advanced look into potential benefits and repercussions of utilizing the ESA under this regulatory proposal. Each panelist highlighted his or her areas of interest in the proposals and described improvements that could be made in the process to finalize the regulations. The webinar allowed participants to learn about the proposed changes as they were opened to public comment.

ELI’s most recent webinar focused on the Waters of the United States regulatory decisions and the ramifications and implications of district court Judge Norton’s August decision to enjoin EPA’s suspension rule. His decision re-instated WOTUS as the applicable legal standard in 26 states not already subject to two prior district court injunctions staying WOTUS. Panelists from law firms, environmental groups, and industry discussed what this change means for the future of the Clean Water Act.

Believing in rational, nonpartisan discussion, ELI provides a perfect venue to explore these major changes in environmental governance. The Institute will continue to provide education on the most pressing and time-sensitive environmental issues.

At the 2017 Our Ocean Conference, Niue’s minister for natural resources, Dalton Tagelagi, announced that the South Pacific Island nation would create a marine protected area covering 40 percent of Niue’s Exclusive Economic Zone to conserve the unique marine diversity in national waters. The MPA will include the waters of the remote Beveridge Reef, a place of rich marine biodiversity.

ELI is helping the Niue government identify and conduct legal reforms to put this MPA into effect. After preliminary analysis by ELI, Ocean Program Director Xiao Recio-Blanco conducted a research trip to Niue to gather information on how to effectively enact the MPA within the nation’s legal framework, with a special focus on fisheries management. With the creation of the MPA, Niue hopes to promote itself as a prime global marine ecotourism destination.

In August, the Institute co-organized a global symposium on The Judiciary and the Environment: Adjudicating Our Future. The conference took place at the Organization of American States, which co-organized the event along with the Global Judicial Institute on the Environment, and the World Commission on Environmental Law of the International Union for the Conservation of Nature.

Over two days, presidents of supreme courts and judges from around the world, as well as renowned experts, convened to discuss the challenges facing the judiciary in implementation and enforcement of environmental law.

ELI President Scott Fulton, who served on the symposium organizing committee, was present to provide welcoming remarks on behalf of the Institute. ELI Vice President of Programs and Publications John Pendergrass co-chaired a session on emerging principles and trends in environmental rule of law. ELI board member Nicholas Robinson and ELI Leadership Council Member Michael Gerrard were also present at the symposium as session co-chairs.

In devising new approaches for the management of materials and the diversion of wastes under the Resource Conservation and Recovery Act, federal regulators can draw on their years of experience working with particular sectors and materials. In the retail sector, managing discarded and returned consumer aerosol cans can often require their management as hazardous waste. This waste stream also accounts for nearly half of the RCRA-regulated material in the retail sector, driving the status of stores as large-quantity generators.

On the other hand, these same cans, when disposed of by consumers in their homes, are treated as household waste and can be managed or recycled in other ways, including ways that involve substantial steel and aluminum recovery from municipal waste management. ELI released a research report exploring this incongruity. RCRA and Retail: Considering the Fate of Consumer Aerosol Cans examines the regulation of the retail sector, the fate and recovery of materials from aerosol cans, and opportunities for further action.

Showcasing ELI’s coast-to-coast reach, the Institute collaborated with Hunton Andrews Kurth’s San Francisco office to hold a summer series featuring key representatives from the region’s environmental regulatory agencies. The series of seminars provided attendees with the opportunity to interact with environmental regulators and professionals in the field on the latest issues and challenges.

(Washington, D.C.): We inhabit a world characterized by rapid transformation in the shape of technological advance, globalization, and environmental change. 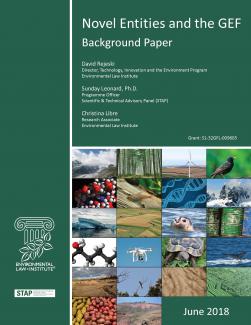 “Novel entities” can broadly be defined as “things created and introduced into the environment by human beings that could have disruptive effects on the earth system.” These may include synthetic organic pollutants, radioactive materials, genetically modified organisms, nanomaterials, and/or micro-plastics. This report, a background paper prepared for the Global Environment Facility (GEF), presents the results of a process developed to systematically identify novel entities that are relevant to the GEF.