(Washington, D.C.): On January 10, 2020, the Council on Environmental Quality published in the Federal Register its proposal for a comprehensive rewrite of the National Environmental Policy Act (NEPA) regulations that govern how federal agencies identify, analyze, and mitigate for the anticipated environmental impacts of proposed major federal actions. Comments to the proposal are due March 10. 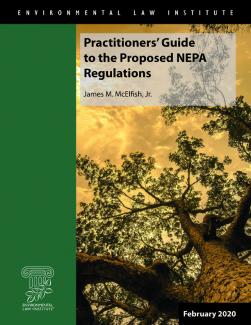 On January 10, 2020, the Council on Environmental Quality published its proposal for a comprehensive rewrite of the National Environmental Policy Act (NEPA) regulations that govern how federal agencies identify, analyze, and mitigate for the anticipated environmental impacts of major federal actions. Comments are due on the proposal by March 10, 2020. This brief guide is in the nature of an issue-spotter to assist commenters and others in determining what changes have been proposed and how they may relate to familiar NEPA regulatory concepts.

In 1970, the Council on Environmental Quality’s first annual report recognized that “man may be changing his weather.” At the time, the mean level of atmospheric carbon dioxide was 325 parts per million, a significant increase over pre-industrial amounts. CO2 levels have skyrocketed since then, reaching a record high of 405 ppm in 2017, higher than at any point over the last 800,000 years.

Federal agencies make thousands of decisions every year with implications for greenhouse gas emissions. Yet, as we near the 50th anniversary of NEPA, the question of how exactly federal agencies should address climate change in their environmental reviews is as controversial as ever. The Obama administration grappled with the issue, producing draft NEPA GHG guidance in 2014. After extensive comments and much further internal debate, a final guidance document was released in 2016. Met with applause in certain quarters, it was criticized by others as going too far, or not far enough.

President Trump withdrew the Obama guidance by executive order in March 2017. Two years later, CEQ published a new “Draft NEPA Guidance on Consideration of Greenhouse Gas Emissions.” The new draft is much shorter than its predecessor, 9 pages as opposed to 34, but how different is it in substance? What are the key takeaways for practitioners?

One noticeable difference is that the 2016 guidance minced no words in acknowledging that “it is now well established that rising global atmospheric GHG emission concentrations are significantly affecting the Earth’s environment.” It declared that “climate change is a fundamental environmental issue, and its effects fall squarely within NEPA’s purview.” The 2019 draft, by contrast, omits such statements, providing little context on the nature of the challenge posed by climate change or why it is critical for agencies to address planetary effects.

In substance, however, the 2019 draft — terse as it is — may be less of a departure than one might think. Like its predecessor, the new draft recognizes GHG emissions as an important component of environmental review and that “comparing alternatives based on potential effects due to GHG emissions . . . can help agencies differentiate among alternatives.”

Both documents recommend that agencies use GHG emissions in their NEPA reviews as a proxy for climate effects. Both suggest that agencies apply the statute’s “rule of reason” in identifying direct and indirect effects and in tailoring their analyses proportionally to the scale of the proposed project.

At the same time, neither document says much about whether an EIS accompanying approval of an energy project, such as a pipeline or a liquified natural gas terminal, must analyze “upstream” or “downstream” GHG emissions — an issue that has produced conflicting results in the courts.

While both documents allow agencies to use available tools and methodologies to quantify projected emissions, they acknowledge that it would be appropriate to forego quantification if available information is unreliable, so long as they provide a reasoned explanation. Both documents also make clear that NEPA does not require cost-benefit analysis, and explain that tools such as the Social Cost of Carbon that attempt to monetize the incremental value of reducing GHG emissions, are primarily intended for rulemaking rather than environmental impact reviews. Finally, while the 2014 draft guidance had included a numerical threshold above which a more robust analysis would be required, both the 2016 and 2019 documents eschew thresholds.

Of course, there are major differences too. The new draft makes no mention of mitigation, an issue that was centrally addressed in the 2016 guidance. The 2019 draft does not address whether agencies need to consider alternatives that generate lower emissions or reduced climate impacts. And in a somewhat cryptic statement, it suggests that agencies need not study indirect climate effects where there is merely a “but for” causal connection with the proposed action.

Perhaps most significantly, the new draft is silent on the need to assess the impacts of climate change on the proposed action. By contrast, the 2016 guidance recognized that “NEPA review should consider an action in the context of the future state of the environment,” and extensively discussed how agencies should evaluate how adaptation and resilience might be integrated into the proposed action.

As CEQ finalizes its draft, one thing is for sure: the new guidance document will not be the end of the story. All indications are that it will raise as many questions as it answers, and that agencies will be wise to proceed cautiously. The document will be subject to change or rescission in a future administration, does not carry the force of a regulation, and is not binding on or enforceable in the courts. As with other NEPA issues, the law will continue to develop on a case-by-case, project-by-project basis.

An Environmental Impact Statement on NEPA

The handful of pages that it takes to print the entire text of the National Environmental Policy Act includes the passages that for the first time mandate public outreach, input, and participation in government decisionmaking. NEPA does this in the process of requiring virtually all federal agencies to undertake an environmental review of any major action they take that has environmental consequences, and it explicitly provides for stakeholder participation.

Yet, now under the Trump administration this bedrock law is under attack. In response to the White House Council on Environmental Quality’s Advance Notice of Proposed Rulemaking on revisions to implementing regulations for NEPA, I took the opportunity to remind CEQ of its responsibility to communities as defined in the law.

The current regulations require agencies to engage in a meaningful way with communities and individuals throughout the entire environmental review process. However, under the guise of “streamlining” the review process and making it more “efficient,” the proposed changes are clearly intended to advance industry interests at the expense of the environment and the well-being of communities that depend on healthy air, soil, and water.

Through NEPA, communities — especially environmental justice communities — are provided a mechanism to engage in a meaningful way with federal agencies around actions that could impact their local environment and public health. In addition, Executive Order 12898, Federal Actions to Address Environmental Justice in Minority Populations and Low-Income Populations, states that each agency should make environmental justice an integral part of its mission. Its accompanying Presidential Memorandum instructs them to apply EJ analyses and include community participation in processes required under NEPA.

Environmental justice organizations and broader environmental organizations realize the impact of legislation that unambiguously calls for public participation. They realize the power provided by NEPA, to have input in agency decisions as stakeholders and even the right to use the statute in litigation.

Many times groups have pursued legal action where agency decisions do not sufficiently include the environmental review required by NEPA. I have been fortunate to work with several. Here are some of their stories.

Raul Garcia, Earthjustice’s legislative director for healthy communities, is a staunch supporter of and educator on the statute and uses the legislation to hold agencies accountable to its requirements in his daily work with neighborhoods impacted by development.

Mildred McClain, executive director of the Harambee House–Citizens for Environmental Justice, is a legal juggernaut. Known as “the NEPA Ninja,” McClain has been working on environmental justice issues for more than 20 years and has utilized the statute to point out opportunities where the public has not been engaged.

Andrew Schiffer is the co-owner of the Duwamish Infrastructure Restoration Training Corp. Dirt Corp is a collaborative team of professionals and community partners in the Seattle area working to increase access to green jobs and to foster healthy neighborhoods. Washington has an equivalent measure, the State Environmental Policy Act, which mirrors federal NEPA requirements in many ways. Because of the SEPA/NEPA process, Schiffer and others working in his community can point to the decision by the state Department of Ecology to make training in environmental assessment available to all who are interested in its application and use — which will allow more people to benefit from the tools provided by the federal and state laws.

Finally, Steven Schima of the Partnership Project has been instrumental in ensuring that communities understand NEPA. He has engaged in many NEPA-related activities, including training on how neighborhoods can better participate in the process. He is spearheading public comment on the proposed NEPA changes.

The fact that so many people rely on the power of NEPA speaks volumes about its use as a tool in ensuring public protections in proposed federal actions. NEPA is also a model for other environmental measures that ensure public engagement as stakeholders in agency decisions as an inherent part of their requirements.

NEPA is more powerful now than it was 50 years ago. It is one of only a few laws that require the public to meaningfully participate in agency actions. In an era when we have seen environmental laws decimated, this 50-year-old statute is more important than ever. Although there have been attempts to disembowel it, we continue to fight for its existence.