On the second day of the workshop, scientists, lawyers, and journalists broke into groups by profession and explored the ethics and professional norms that influence communication of scientific uncertainty. This section briefly summarizes the key points of discussion in these sessions.

The science breakout session first examined challenges with ethics and professional norms that relate to communicating scientific uncertainty. They focused on two types of issues: (1) misconduct; and (2) norms. First, the group discussed the fact that some scientists behave in ways that are violations of professional and ethical standards when intentionally miscommunicating science in some instances, illegally obtaining information, etc. 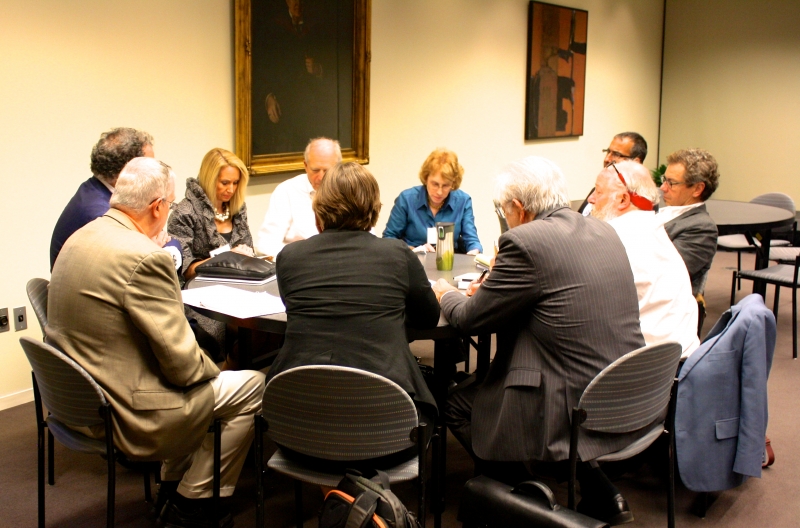 In a break out session, participants discuss how professional norms and ethics influence their communication of scientific uncertainty.

Beyond these acts of misconduct, the breakout group examined the internal and external norms that drive communication approaches. These included the system of academic reward, which emphasizes individual publication and recognition, leading to sharing individual results and accomplishments rather than more holistic sharing of information. Similarly, in the competitive sphere of academia and other sectors, scientists may suppress unpublished data, leading to ongoing scientific uncertainty. Also related to publication, the breakout team noted that negative data are not published, so scientific uncertainty may not be fully appreciated or understood. Other examples included the lack of reward for engaging with journalists and lawyers and enormous meetings that don’t allow effective communication.

Solutions to these challenges include the need for synthesis-type approaches within and across fields of science so that the full suite of information on a given topic is evaluated and shared holistically. However, some members of the breakout group cautioned that synthesis teams could undermine efforts to question consensus and explore new avenues of research. To address this, the group discussed the need for “read teams” and minority opinions to be included in synthesis documents. Another solution focused on helping scientists communicate through the use of designated spokespeople and public affairs specialists who have the experience and knowledge base to share research results in a way that recognizes specific scientific achievements and the broader field or research. Finally, the group discussed the need for common norms across disciplines, training on communicating scientific uncertainty and the need for humility and recognizing academic scientists’ roles in service to society.

The journalist breakout group noted several challenges related to the ethics and professional norms of communicating scientific uncertainty. These included the desire to present balanced information that could in fact represent a false balance of information. However, several professional norms support improved approaches to communicating scientific uncertainty, including the journalist’s role as an objective conveyor of information and role in informing the public.

To improve communications and overcome professional challenges, the breakout group identified the role of journalists in engaging with communities and uncovering information that would allow scientists and lawyers to delve deeper into an issue (providing the example of a reporter uncovering illness related to an asbestos mine in Montana). They described the need for mentors for people joining the profession. They also discussed the need for a broader, more clearly defined gap between journalism and advocacy.

At the outset, the lawyer breakout group noted that truth is not per se the client’s priority but recognized that lawyers at least do share the requirement to avoid flat-out untruth. Lawyers’ obligations to clients can constrain their ability to fully communicate scientific uncertainty. Further, the group recognized that lawyers have many different roles: not only as litigators, but also as policy-makers, professors, legislative advisors, researchers, and more. Different ethical responsibilities and professional norms arise depending on which role lawyers are playing.

Click here to go back to the "Findings" page.