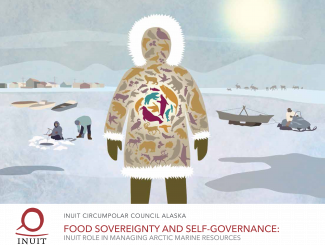 Inuit are at the forefront of the drastic changes taking place in the Arctic. As the world community increasingly turns its focus to the Arctic, it is important to ensure that Inuit Food Sovereignty is a priority in every context. Western management systems overlaid on top of traditional Inuit practices often take a different approach, sometimes grounded in historical discrimination.  This Inuit-led report links Inuit Food Sovereignty to holistic and adaptive management strategies that can ensure the food security, health, and well-being of Inuit throughout the Arctic for generations to come. The report uses four case studies focused on walrus, char, beluga, and salmon as a lens to explore current management and co-management practices in Alaska and the Inuvialuit Settlement Region. The report further offers snapshots of important connecting components, such as climate change, the need for an ecosystem-based approach, the impacts of imposed borders, and the strength and resilience of Inuit culture. Throughout this work, the authors have emphasized the importance of law and policy reforms needed to capture the perspectives of Inuit. In addition, the interpretation and implementation of such law and policy must be understood in relation to how they support or impede our food sovereignty in a rapidly changing Arctic.

This project was conducted in partnership with the Eskimo Walrus Commission, the Inuvialuit Game Council, the Fisheries Joint Management Committee, the Kuskokwim River Inter-Tribal Fish Commission, the Association of Village Council Presidents, Environmental Law Institute, and advised by ICC Canada. The report is a product of over 90 Inuit authors and a nine member Advisory Committee.