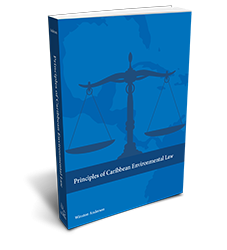 The Caribbean faces environmental problems suffered throughout the world, but also a unique set of challenges. The petroleum and bauxite industries and tourist trade have traditionally gone largely unregulated in the region, threatening pristine coasts and scarce natural resources. Now, as the region seeks to improve management and regulation, a clear guide to Caribbean environmental law is desperately needed. Principles of Caribbean Environmental Law provides that resource.

The book explores international environmental law as it relates to the Caribbean, administrative law, and the common law of property and torts. It addresses issues from town planning to pollution regulation to waste management. And it examines marine and coastal governance: particularly critical to an economy built on beach tourism. This volume will be an indispensable resource for anyone concerned with the future of the Caribbean's natural landscape.

Winston Charles Anderson, of Jamaican nationality and upbringing, took the degree of Bachelor of Laws from the University of the West Indies (Cave Hill Campus) in 1983, and proceeded on a Commonwealth Scholarship to Cambridge University in England, where he graduated with a Doctorate in Philosophy in 1988 majoring in International Law and Environmental Law. Also, in 1988, he successfully completed a course of training at the Inns of Court School of Law in London and was called to the Bar of England and Wales, as Barrister, with membership at the Honourable Society of Lincoln’s Inn.

On June 15, 2010, Professor Anderson was elevated to the Bench of the Caribbean Court of Justice (CCJ) at King’s House, Kingston, Jamaica. He was sworn in by His Excellency the Governor General of Jamaica, Sir Patrick Allen, in the presence of Prime Minister, The Honourable Bruce Golding; Leader of the Opposition, The Most Honourable Portia Simpson-Miller, among other dignitaries and guests. The Hon. Mr. Justice Anderson has the distinction of being the first Jamaican so appointed to the CCJ.

Judge Anderson is married to Dr. Sandra Anderson and they have three children: Anessa, Aleisha, and Anquan.