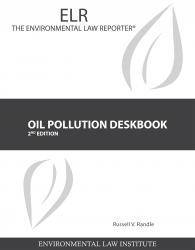 Russ Randle wrote the 1991 version of the Oil Pollution Deskbook and has returned to write the second edition. He has practiced, published, and taught about most aspects of environmental law since 1981, during which time he has served as chair of Patton Boggs LLP’s environmental group, Year-in-Review Vice-Chair of the American Bar Association’s (ABA’s) Superfund Committee (part of the ABA’s Section on Environment, Energy, and Resources), and author of numerous articles on environmental issues, including several about the 2010 Deepwater Horizon disaster. His clients have included oil and technology companies, municipalities, individuals, and environmental groups. Russ also has been advising several clients concerning the BP Deepwater Horizon disaster. Because of this broad and lengthy experience, he has handled difficult issues under most federal environmental laws, some in litigation, some in transactions, some in administrative rulemaking, and some in legislative efforts.