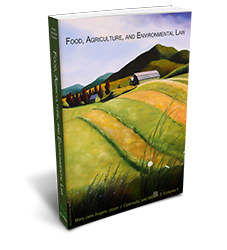 In the groundbreaking Food, Agriculture, and Environmental Law leading environmental legal scholars Mary Jane Angelo, Jason Czarnezki, and Bill Eubanks, along with five distinguished contributing authors, undertake an exploration of the challenging political and societal issues facing agricultural policy and modern food systems through the lens of environmental protection laws. Through this exploration, the authors seek to answer difficult questions about the need for new approaches to agricultural policy and environmental law to meet 21st Century concerns surrounding:

This book supplies a comprehensive, timely, and cohesive guide on the intersection of agriculture and the natural environment. It achieves this goal through an interdisciplinary lens, engaging diverse perspectives to provide both a practical and academic examination of the environmental impacts of current farm policy, the applicability of environmental regulatory mechanisms to agriculture and food, and reform proposals to combat environmental harms while protecting farmers' economic interests as well as the rural communities they bolster. As a result, this work serves as the quintessential text for bringing these issues to the classroom in a variety of fields, including law, public policy, agricultural economics, and environmental science.

Mary Jane serves on two National Academy of Sciences, National Research Council Committees: The Committee on Independent Scientific Review of Everglades Restoration Progress and the Committee on Ecological Risk Assessment under FIFRA and the ESA. Mary Jane is also a member of the Vermont Law School summer faculty and has taught and lectured throughout the United States and other parts of the world, including Belize, Brazil, Costa Rica, Poland, and Uruguay. She is also a Member-Scholar with the Center for Progressive Reform in Washington, D.C.

Prior to joining academia, May Jane practiced as an environmental lawyer for many years. She served in the U.S. Environmental Protection Agency Office of the Administrator and Office of General Counsel in Washington, D.C., and as Senior Assistant General Counsel for the St. Johns River Water Management District in Florida. Her substantial environmental law practice has included water law, wetlands law, endangered species law, pesticides law, biotechnology law, and hazardous and toxic substances law. Mary Jane received her B.S., with High Honors, in biological sciences from Rutgers University, and both her M.S., in Entomology, and J.D., with Honors, from the University of Florida.

Jason Czarnezki is, as of the 2013-2014 academic year, the Gilbert & Sarah Kerlin Distinguished Professor of Environmental Law at Pace Law School. Prior to joining the Pace Law faculty, he was Professor of Law in the Environmental Law Center at Vermont Law School and faculty director of the U.S.-China Partnership for Environmental Law. He also has held academic appointments at Marquette University Law School and the DePaul University College of Law. Jason also served as a guest researcher at Uppsala University in Sweden in 2011 and spent the 2009-2010 academic year as a J. William Fulbright Scholar at Sun Yat-Sen University in Guangzhou, China. He has presented his work on environmentalism, natural resources law, food policy, and global climate policy at universities, public interest organizations, government institutions, and conferences throughout the United States, Europe, and Asia.

Among other topics, Bill has also written and lectured extensively about the environmental and public health impacts of agricultural policy and examined various proposals to create more sustainable and resilient food systems. Bill serves as an Adjunct Professor of Law at Vermont Law School and an Adjunct Associate Professor of Law at American University’s Washington College of Law, where he teaches courses on environmental law, food systems, and agricultural policy.

“This book is an essential guide for changing the direction and dynamics of a food production system in deep peril. The good news is that we already have a complex structure of policies, laws, and regulations in place that, if properly applied, could help us right the course of American agriculture. Food, Agriculture, and Environmental Law may be just the book to inspire a new generation of policymakers, activists, and lawyers to rebuild a food system around the principles of environmental sustainability, social equity, and rural vitality.”
- Daniel Imhoff, Distinguished Author (Food Fight: The Citizen’s Guide to the Next Food and Farm Bill and Farming with the Wild: Enhancing Biodiversity on Farms and Ranches) and Director at Watershed Media

“This groundbreaking book has arrived in the nick of time to provide a carefully crafted blueprint for what must be done to reform our food and agricultural systems through existing laws and policies. A must read for anyone who enjoys healthy food produced in an ecologically sustainable manner, this book provides a ray of hope in a darkening landscape.”
- Patrick A. Parenteau, Professor of Law and Senior Counsel to the Environmental and Natural Resources Law Clinic, Vermont Law School