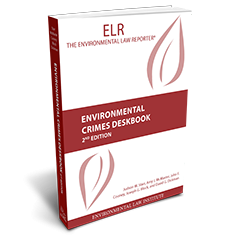 In the Environmental Crimes Deskbook 2nd Edition, leading experts Judson W. Starr, Amy J. McMaster, John F. Cooney, Joseph G. Block, and David G. Dickman bring together over one centuryof combined experience in complex criminal environmental cases to create a practice-oriented reference source essential for all who work in environmental law. Familiar with the viewpoints of private practitioners and enforcement officials alike, the authors offer their expertise on how the emerging criminal and environmental law comes together.

Greatly expanding on the first edition both in breadth of issues and depth of analysis, the Environmental Crimes Deskbook 2nd Edition lays out the basic concepts of criminal environmental law and how they fit into the larger context of environmental regulation. The book is divided into three main parts. In the first, the authors discuss the history of the federal environmental crimes program; the policies and factors that DOJ, EPA, and the U.S. Attorney’s Offices consider when deciding whether to bring a criminal environmental case; and the primary means by which a case is initiated. The second part focuses on legal theory and strategy, including a detailed discussion of the knowledge element as it is applied in environmental criminal law. Here, the authors offer practice-oriented guidance, providing a detailed “how-to” guide for responding to an environmental criminal investigation as well as suggestions and issue-spotting in the pretrial, trial, and sentencing stages of a case. In the final part, the authors analyze the primary environmental statutes—including the Clean Air Act, the Resource Conservation and Recovery Act, and the Toxic Substances Control Act—and provide a brief discussion of landmark cases.

Judson W. Starr has been a partner in the Washington, D.C., offices of Venable LLP since 1988. From 1982 to 1988, he was the first Director and then Chief of the Environmental Crimes Section, U.S. Department of Justice, Environment and Natural Resources Division. He has served as co-chair of various subcommittees on environmental crimes in the American Bar Association, and as a member of the Environmental Crimes Advisory Group, U.S. Sentencing Commission. For the past 17 years, he served as co-chair of the ALI-CLE (formally ALI-ABA) Criminal Enforcement of Environmental Crimes Conference. A frequent panelist and author on environmental enforcement issues, he was named by the National Law Journal and Chambers as one of the nation’s leading white-collar-crime experts. He has been recognized in Best Lawyers in America 2003–2013 and was named the DC Environmental Lawyer of the Year for 2011. He is a member of the Board of Directors for Medstar Georgetown University Hospital, the co-chair of the Georgetown Law School’s Corporate Counsel Institute’s Advisory Board and a board member for Somerset Prep DC Charter School. He is a graduate of Washington and Jefferson College and Georgetown University Law Center.

Amy J. McMaster is a partner in the Environmental practice group in Venable LLP’s Washington, D.C., office. She has specialized in environmental criminal defense for over 10 years. Ms. McMaster is presently handling a criminal case related to wetlands impacted during a land development project, and recently worked on matters for a leading manufacturer of farm equipment and a major oil refinery. She also has extensive experience in civil enforcement, and focuses on providing clients with a holistic solution to their NEPA, NHPA and CWA issues. Ms. McMaster has authored several articles on wetlands and endangered species issues. She graduated with distinction from the University of Victoria and the College of William & Mary School of Law, where she was a member of Order of the Coif and an editor of the William & Mary Law Review.

John F. Cooney is a partner in the Washington, D.C., office of Venable LLP. He counsels clients on a broad range of regulatory issues involving federal agencies and has an active litigation practice in federal district courts, courts of appeals, and the Supreme Court. Mr. Cooney has had extensive experience in civil and criminal matters involving environmental problems, including obtaining an injunction in federal district court against the federal government’s imposition of a moratorium on further deepwater drilling after the Deepwater Horizon explosion. Mr. Cooney previously served as Deputy General Counsel of the Office of Management & Budget, where he represented the Office of Information and Regulatory Affairs in its review of rules submitted for White House policy review, and served as an Assistant to the Solicitor General. Mr. Cooney graduated magna cum laude from Brown University and from the University of Chicago Law School, where he was a member of Order of the Coif and an editor of the University of Chicago Law Review.

Joseph G. (Jerry) Block is the former Chief of the Environmental Crimes Section of the U.S. Department of Justice from 1988-1991. He is a frequent author and commentator on environmental criminal issues and is a recently retired partner from Venable LLP’s Environmental Group, which boasts one of the nation’s preeminent environmental criminal defense practices. He received his law degree from Harvard Law School and did his undergraduate work at the University of Michigan.

David G. Dickman has been with Venable LLP since 1998 and represents clients on issues involving environmental, safety, security, and hazardous materials transportation laws and regulations, focusing primarily on the marine industry. He advises clients on international, criminal, civil, and administrative aspects of maritime and transportation legal issues. He served 24 years as an active duty officer in the United States Coast Guard. In addition to his Coast Guard legal experience, he has practical maritime law enforcement, pollution response, and port security experience, having served as a marine inspector, marine casualty investigating officer, oil and hazardous chemical pollution response officer, and port security planner during his service with the Coast Guard. He has a broad-based practice, working for legislative solutions on the Hill, on regulatory and enforcement matters involving executive agencies, and on criminal and civil litigation cases on behalf of a diverse group of clients. He has published numerous articles and been a panelist on the criminal enforcement of maritime environmental laws. He was recognized in the 2013 edition of Chambers USA (Band 3), Transportation: Shipping: Regulatory (outside New York), Nationwide. He is a graduate of the United States Coast Guard Academy and St. Louis University School of Law.