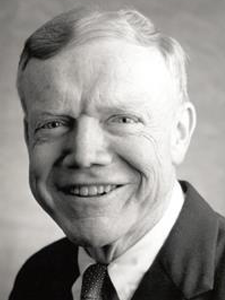 Mr. Legro was born in 1936 in Muskogee, Oklahoma.  He graduated first in his class at the U.S. Naval Academy with a B.S. in Engineering and received his J.D. cum laude from Harvard University. Mr. Legro practiced law in Southern California, where he served on the San Diego City Planning Commission, and in Washington, D.C., where he was of counsel at Verner, Liipfert (later DLA Piper). He served as an Adjunct Fellow at the Center for Strategic and International Studies in Washington from 1989 to 1993, and he was a long-time supporter of the U.S. Naval Academy Foundation, particularly the Naval Academy Foreign Affairs Conference. He served as an officer in the Marine Corps and retired as a Captain. He divided his time between Washington, DC and Rancho Santa Fe, California.

Mr. Legro was an avid traveler—he particularly enjoyed trips to New York to the Metropolitan Opera with friends—and an enthusiastic grandparent. He is survived by his brother, Monta (Donna) Legro of Houston, Texas, his daughter, Susan Legro of Prague, Czech Republic, his son, Wayne Legro of Seattle, Washington, and his two granddaughters.