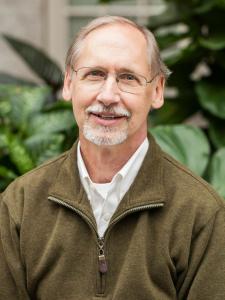 George Wyeth became a Visiting Scholar at ELI in October 2018.  Before joining ELI, he was with the U.S. EPA for 27 years, in a variety of roles as an attorney and as an internal advocate for innovative approaches to environmental protection.  His work at ELI continues to focus on innovative strategies, particularly the potential for citizen science to impact policy and support agency programs.

At EPA, George spent much of his career leading efforts to study, evaluate and adopt innovative strategies.  These included regulatory models such as performance-based approaches to air permitting that allowed greater flexibility for businesses to modernize production processes without sacrificing environmental protection, and a cost-effective strategy for regulation of small businesses.  Other initiatives were voluntary in nature, such as finding the environmental gains inherent in “lean” manufacturing strategies and assessing the relative roles of government and business in sustainability initiatives.  He also supported work to use new tools to promote compliance with environmental regulations and encourage planning for compliance throughout the regulatory design process.

Earlier in his career at EPA, George was an attorney in the Office of General Counsel where he was an expert on CERCLA, RCRA and other environmental statutes.

In 2013, George was a Fulbright Scholar based in Pune, India, where he conducted research on the role of sustainability in Indian manufacturing firms. In 2010 he was Scarff Visiting Professor of Government at Lawrence University in Appleton, Wisconsin.

He has published on a variety of legal and policy topics, including the impact of citizen science on policy in the U.S., the relationship of sustainability to environmental regulation, the contrast between traditional and innovative models of environmental protection, and the economic theory of the takings clause.  His publications include:

Prior to joining EPA in 1989, George was a partner with the Minneapolis law firm of Leonard, Street and Deinard (now Stinson Leonard Street).  He holds a B.A. from Lawrence University (1973), M.P.P. from the University of California, Berkeley (1975) and J.D. from Yale Law School (1982).  He was born and raised in Rockford, Illinois and remains a midwesterner at heart.